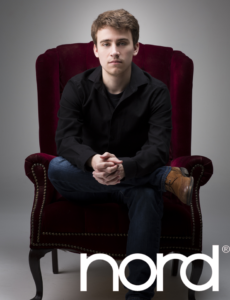 In February I sent an email to Nord Keyboards asking about the endorsement process. I use the Nord Stage 2 exclusively, so it made sense to at least ask. I was expecting the same radio silence I always receive, but to my surprise I got a response, one that basically said, “Well, what do you have to offer?”

Shit. What do I have to offer? I’m the nobodiest nobody of all time, a musician struggling to break into my local music scene. What possible value could I add to a renowned international keyboard company?

Knowing I would likely fall well short of their expectations or even their minimum requirements (they asked me who I was touring with lol), my goal was to show that even if my current success doesn’t impress, I don’t suck and I’m very dedicated to my career. I rattled off everything I could think of in an attempt to show that I was worth an investment: provided links to my music, social media numbers, previous and upcoming gigs—anything. I mulled over the response many times before I finally hit that send button, and then I waited.

An excruciating wait, I caved into the anxiety and asked for an update about three weeks after I sent my pitch. They responded a day later, and somehow, in one of the luckiest moments of my life, it worked.

I was endorsed by Nord.

Typically at this time you do not qualify for a Nord endorsement. We are going to make an exception. So, congratulations.

I’ll admit I’ve read that statement many times just because it felt so good. Despite not meeting their minimum requirements, I made enough of an impression for them to endorse me anyway. Holy shit! If that doesn’t feel good, what does?

All celebrations aside, for anyone who’s reading this and is in a similar position, let this be a reminder to not give in to the fear of failure. I could have easily thought, “What value can I add to Nord?” realized it was practically nothing and given up. But I didn’t. I at least gave it a shot, realizing that there was a very good chance I would be rejected outright. And in the end, because I decided to send a simple email, I’ve taken a huge step forward in my career.