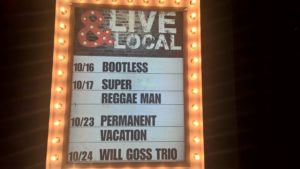 It was a cool autumn night as we pulled our cars up to the back of the Wild Wing Cafe in Mount Pleasant, South Carolina. The back door was open and an employee sat near it, smoking a cigarette. From inside came the sounds that dominate Saturday nights in the South this time of year: the sound of football.

As we hauled our gear into the venue, we cracked jokes and gave each other shit, most likely in an effort to ease the tension, because we all knew this was a big show for us. For one, it was on a stage and we’re used to roughing it out on the same level as the audience, often taking microphones to the face when drunk patrons decide they want to dance. Second, Wild Wing Cafe was a show we had been trying to get since the band formed in early March. Seven months of work led up to this point, and we certainly didn’t want to screw it up.

After all our gear was inside and the setup began, I noticed a sign adjacent to the stage. “Live & Local” it read, with a list of band names bordered by white lights—like something from a theater in the early 1900s. All the way at the bottom was our band name. Actually, it wasn’t even the right name—we’re the Will Goss Band, not the Will Goss Trio—nonetheless, it still struck a chord with me.

It’s amazing how rare that can be in the music business, or in any field for that matter. There’s so much competition that it’s incredibly difficult to get noticed. When everyone is shouting at once about how great they are, what makes us think we’ll be heard? And yet, we were. In seventh months we climbed from nothing, a new band that didn’t even have a name, to one of the better venues in the town, with the potential to use this venue to tour a number of neighboring towns.

It’s interesting that it’s the small things that remind us of the bigger ones. It was a simple sign with our band name on it, nothing out of the ordinary, that reminded me of our larger goals in music and that, most importantly, we had achieved one of them.

But, there wasn’t much time to be sentimental. We had to finish setting up and then run a sound check, so I took a quick picture of the sign so I could be sentimental on my own time. We certainly haven’t made it, but we’re one step closer.

This picture will be a reminder of that.